The Difference Between Leadership And Management 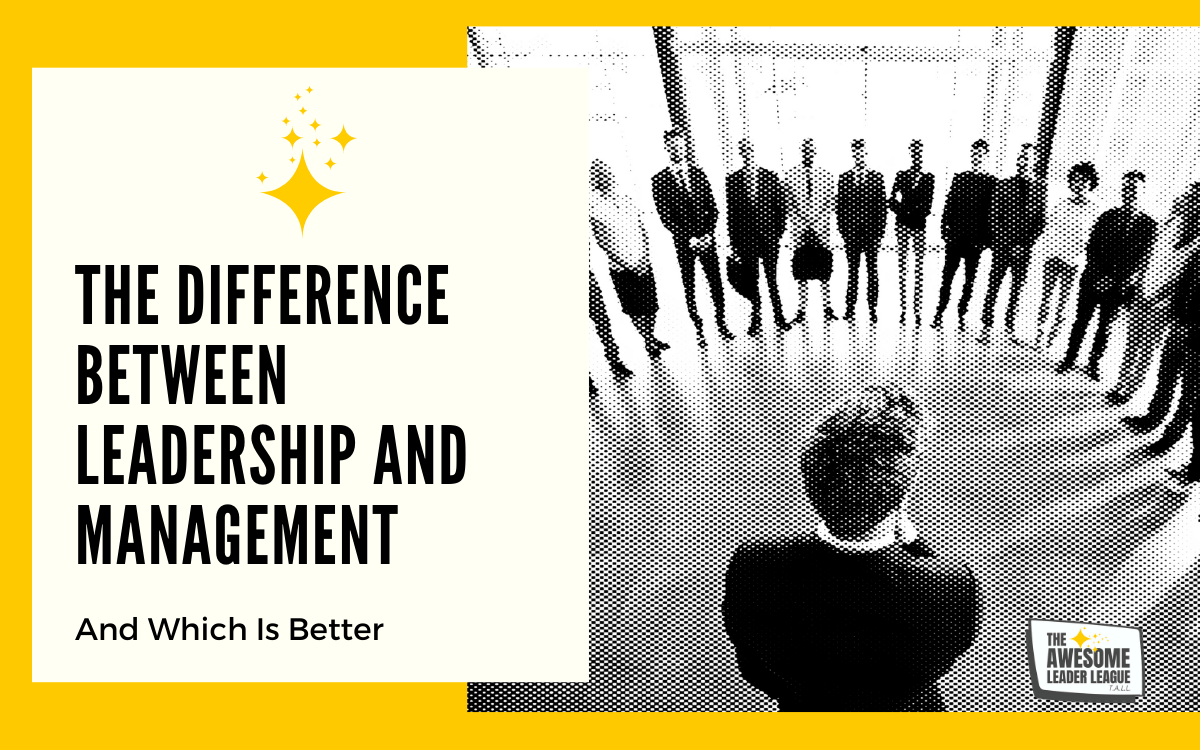 The terms “leadership” and “management” are often used interchangeably.

Have you ever wondered about leadership vs management? What’s the difference?

Although it’s common to confuse leadership and management, we need both, and they both play an important role in business success.

How Is Leadership Different From Management?

Let’s take a look at the differences between leadership and management.

Management often has a hierarchical structure, with power concentrated at the top of an organization. Positions and titles such as Senior Manager, Assistant Manager, Manager, and so on and usually require more specific knowledge about how things work or are done.

Managers are crucial to the day-to-day operation of a company.

Management can be a very tactical role that has a lot of responsibility in an organization.

Managers are often stereotyped as having little vision or influence because they usually do not set the long-term strategy, vision, mission, or direction of a company, but this is not always the case depending on the organization and individual.

Leadership is the ability to motivate and inspire others.

Leadership focuses on setting an organization’s mission, vision, values, and culture for the future. As well as connecting with people to make sure they understand how important their job is to the organization’s success.

Leadership is not about titles, positions, or controlling but rather the way you influence in your day-to-day interactions with people at all levels within the organization. Focusing often on empowering employees to have autonomy, take the initiative, have pride and ownership of their work to reach their goals.

Leaders create the environment and connect with their employees as a human person and understand what motivates them to be more productive, creative, and collaborative. Leaders use influence and inspire others to take action, work together for common goals, or change attitudes/behaviors due to a strong, focused understanding that you can’t manage people  you — lead people.

Both leaders and managers can be responsible for employees and teams. 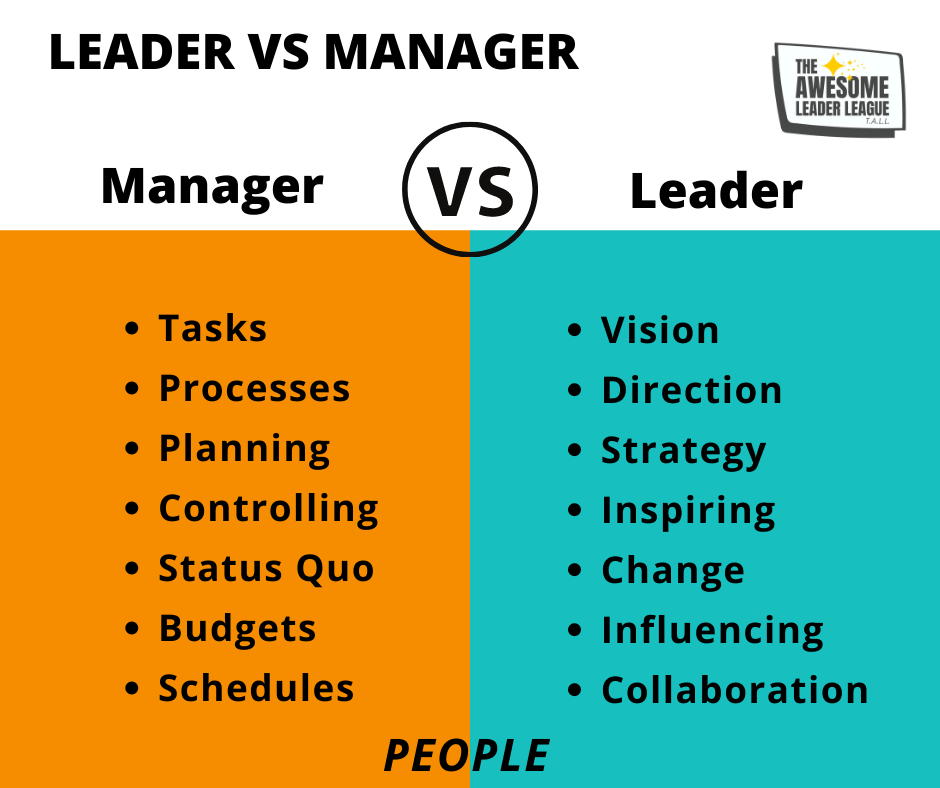 Managers are responsible for managing employees to stay productive and continue to work hard towards the company’s goals while achieving their objectives within the organization.

Managers need people to get their job done. Managers are not always good leaders because, many times, their focus is on running tasks efficiently and without conflict or drama — avoiding any significant changes in the status quo.

Leadership requires influencing others for a greater purpose that brings about change — something most managerial positions lack because they often focus on power and controlling employees.

For a manager to be considered a leader, they would need to demonstrate traits of being inspirational and motivating intrinsically without control tactics and carrot and stick incentives. Being someone employees choose to follow.

Good managers know it is key to take care of their employees and create the right environment for them to do their best work. Not through control, force, or commands.

They know employees who think they are a bad manager or a “bosshole” will often not be as productive or focused on the work and will often put in minimal effort.

A good manager is able to communicate effectively and delegate tasks in such a way that their employees want to do what they are asked. In contrast, a leader might inspire others by being an example of the type of behavior you would like your team members to emulate.

A good manager will also be able to make tough decisions when necessary, which is often a role played by leaders as well.

While a manager’s role is different from a leader’s in terms of what each one does daily, managers and leaders are both important, and it doesn’t mean you can be both.

Can You Be Both A Leader And Manager?

Yes, many jobs in the workplace require the qualities of successful leaders and managers. It is common for managers also to be leaders because they need the skills of both roles for their team and company to function well, leading to success.

Managers are responsible for keeping the business running on time, ensuring that people have what they need to stay productive—from schedules, supplies to information about where to park today because there’s a special event taking over the parking lot.

On the other hand, leaders are responsible for guiding people to achieve their potential by fostering an environment where everyone can do what they do best and be recognized for it.

The key is that managers manage things — like time, money, plans, or budgets — while leaders lead people — such as individuals, teams, departments, or entire organizations.

So yes, leaders can also be managers, but not all managers are experts at leading.

To be an effective leader, it’s important to have management skills as well.

So a goal would be to have the ability and qualities of both. Being a good manager and a leader for your team.

Which Is Better? To Be A Manager or Leader

Some people prefer to be a manager, and others prefer leadership, but both are important.

Both leadership and management have their own distinct set of responsibilities that make them different, but both positions are vital in a successful organization.

A person might have to take on different roles in certain situations, depending on the situation they’re facing.

Sometimes you need both attributes for a position or task; that is why it can be hard to say which one of these two approaches might be better overall or more important to organizational success.

With the right leadership skills, you can make a difference in your organization, which can often lead to becoming a better manager as well.

So why not set your sights on building your skills and abilities to step into either position when needed.

Leadership and management are both different skillsets. One is not better than the other; they’re simply just different.

It’s important to have a balance of leadership and management in your organization to take care of your people and manage them.

I’ve had many managers and leaders in my lifetime. Some were great, some not so much. The great ones, one thing they all had in common was that they cared about their people. They took care of them, supported them, and guided them to do the best work.

In other words, they choose leading people by example. Always doing what needed to be done with a sense of urgency but also fun!

If you want more on how to lead/manage like this — I invite you to join The Awesome Leader League, the ultimate collection of leadership skills, tools, and resources to help you be a better leader.

Rebecca Morgan, PhD, is an award-winning former Disney leader and founder of The Awesome Leader League (T.A.L.L.), the ultimate collection of leadership skills to help you be a better leader. Without EVER being a soul-sucking “boss-hole.” Join us here.

It's yours! Now check your mail